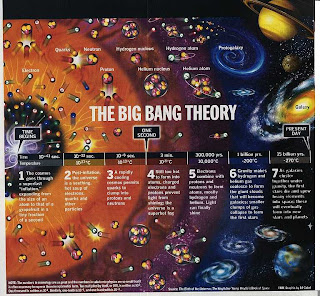 The Big bang is one of the theories developed to explain the origin of universe. According to it the universe starts from a big hot ball which is million million times hotter than the sun. The particles are in the state of plasma where there are no atoms. The burst of this hot ball lead to the formation of universe. But this does not explain all the phenomena in the universe it's just a good attempt to explain the formation of universe. No one knows what is before the Big bang as all the law of physics General Law of relativity itself fails in the singularity of the Big Bang (Its theory of relativity which predicted the Big Bang)
Posted by PayBlogger at 8:43 PM No comments:

Man never landed on the moon! It was the biggest lie of the 20th century. Americans did it because of the cold war between them and the Russians. The 1960's American newspapers were dominated by the threats that Russians are going to land on the moon before them and there they would set a nuclear base, seems funny but its true!, they were threatened. Americans tried it many times but there shuttles or rockets hardly even left the ground. Meanwhile the Russians sent the first satellite in space, which again challenged the Americans. As a result, they came up with this fraud. When they were successful to launch some of their rockets in 1969-72, they really orbited around the earth while the astronauts were playing on the American land. Before, the Russians had sent a dog in space, it died immediately as the rocket crossed the earth’s magnetic field because of the immense radiation. They concluded that no man could ever reach the moon unless he is protected by 6-foot thick lead sheet all the time. The suits that they wore barely had a 1-inch thick aluminum protection.
Posted by PayBlogger at 8:42 PM No comments: