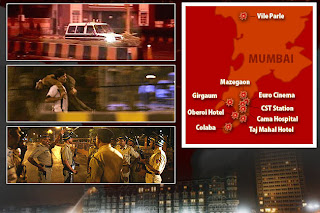 1) 26/11/2008 will go down as one of the darkest days in the history of Mumbai and India. Life in the country%u2019s financial capital remains paralyzed as terrorists hold the city under siege. In a heinous terror attack that the country has seen in recent times, Mumbai came under an unprecedented night attack 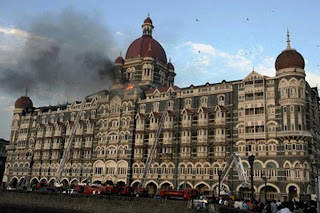 2)Terrorists equipped with heavy machine guns, including AK-47s and grenades to strike at the city's most high-profile targets- the Chhattrapati Shivaji Terminus (CST) rail terminus; the landmark Taj Hotel at the Gateway and the luxury Oberoi Trident at Nariman Point; killing at least 101 and sending hundreds of injured to hospital. 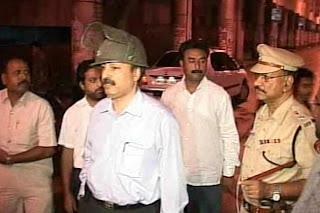 3)The attacks have also taken a tragic toll on the city's top police brass: The high-profile chief of the Anti-Terror Squad (ATS) Hemant Karkare was killed; 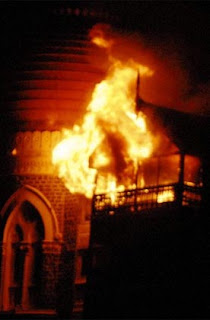 4)By midnight, the city was shaken. Mobile networks got jammed as anxious relatives made frantic calls, SMSes. The police were asking people not to venture out and stay home. The Army and the NSG had been called out to lend a helping hand to Mumbai Police. By Thursday morning, the Navy had also been sounded out. For Mumbai and the rest of India, the nightmare had just begun as the Army, Navy and the police trooped in to rescue the hostages. 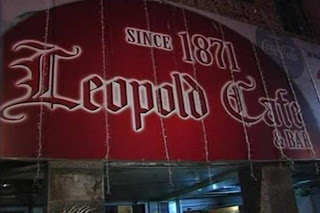 5)It was a regular Wednesday evening for this popular watering hole in Colaba in south Mumbai which is frequented by a lot of foreign tourists. At 2130 hrs IST, three gunmen opened fire at the guests inside Café Leopold. 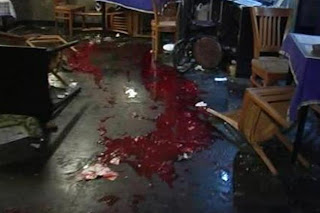 6)In minutes, the music was replaced by gunshots. The century-old joint was riddled with bullet holes. Blood stains on the floor and shoes of fleeing customers reminded of an evening gone awry. 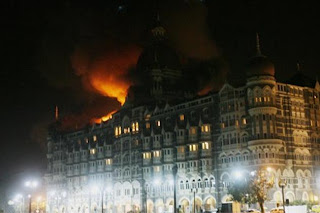 7)Next on the list was the city’s heritage hotel The Taj Mahal Hotel and Tower Palace. Terrorists opened indiscriminate fire at police and paramilitary forces outside the hotel between 2215 hrs IST and 2230 hrs IST. 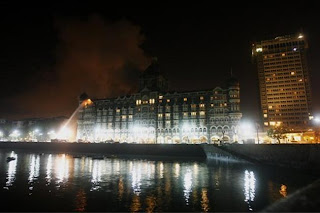 8)Around 200 guests were holed up inside a hall as they were advised by the hotel staff not to go out because of the attack by terrorists. At the time of writing this, terrorists are still holed up in the hotel’s lobby even as the NSG commandos make their way to evacuate the stranded hostages and capture the terrorists. 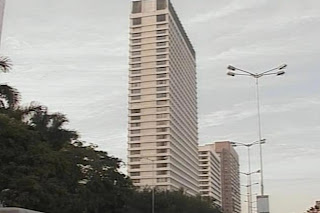 9)Minutes later, bullets were fired near Oberoi Hotel, now rechristened as Hotel Trident. The majestic five-star hotel is barely a kilometre away from the Taj. 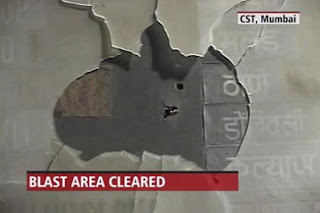 10)At 2233 hrs IST, another of Mumbai’s landmarks, the Chhatrapati Shivaji Terminus (CST) Station came under attack. A couple of terrorists entered the passenger hall of the crowded CST railway station and opened fire. They also threw a grenade killing three persons. 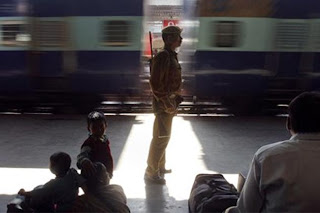 11)Eyewitnesses recalled that terrorists entered the CST building from outside the reservation counter and opened fire indiscriminately. Two explosions also went off outside the CST and eyewitnesses reported they heard gunshots outside the railway station building. 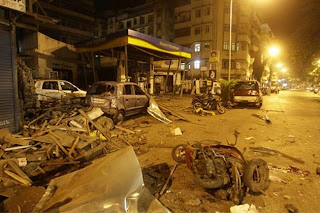 12)Later in the night, two bomb blasts, one in Vile Parle, a residential suburb in north Mumbai, and another in Mazegaon, also injured an unspecified number of people. Five people were killed in a bomb blast targeting a taxi in Vile Parle. 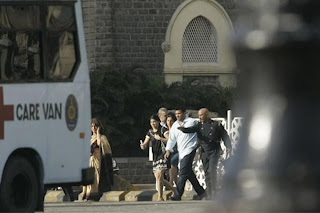 13)It was July 26 Ahmedabad revisited for Mumbai as patients at the Cama Hospital were taken hostage by terrorists. Army and police commandos engaged in fierce gunbattle with the terrorists and managed to flush them out. 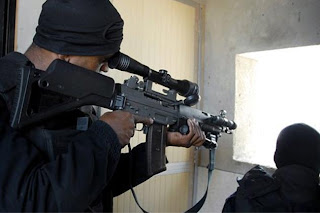 14)The residential complex with a Jewish prayer hall witnessed heavy exchange of fire as a hostage situation prevailed. 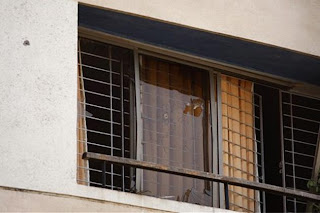 15)Reports say that gunmen seized the Mumbai headquarters of the ultra-orthodox Jewish outreach group Chabad Lubavitch overnight. Shots were heard coming from the building. Efforts are still on to rescue those trapped. 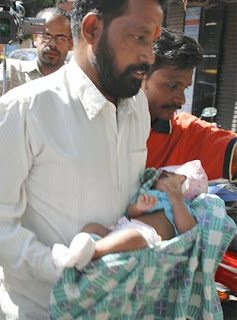 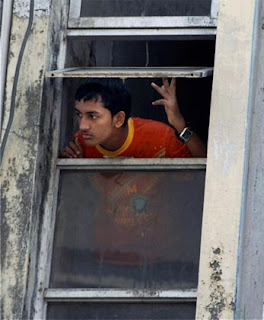 17)Normal life in the city remained crippled with many offices asking their employees to work from home. Train services which were hit Wednesday night however resumed. 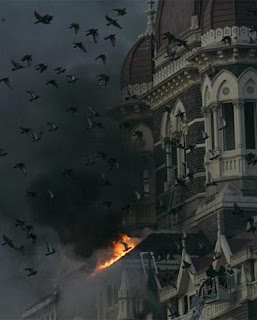 18)The pattern and the locations chosen show extensive research and homework had been done. 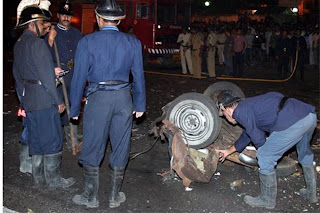 19)South Mumbai, which is one of the most affluent areas of the country, is home to Mumbai's rich and famous as well. Plush hotels like the Taj and Oberoi which are frequented by a lot of foreign tourists were targeted, the intent clearly being to create fear psychosis and denting India’s image equity. 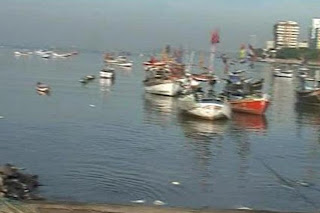 20)Initial theories suggest that the terrorist came by sea. An Indian Navy ship on Thursday gave a chase through high seas to intercept a merchant vessel that is suspected to have brought ten of them to Mumbai. The Indian Coast Guard had also deployed two fast patrol vessels and two aircraft to look for a merchant vessel. 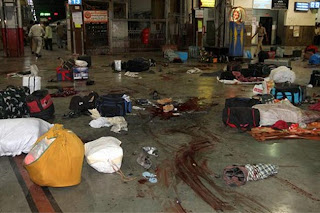 21)The little-known Deccan Mujahideen group has claimed responsibility for the coordinated terror attacks which have left the security agencies baffled. In the camera shots, a suspected terrorist involved in the gruesome shootout ever to be undertaken by terrorists, the AK-47 wielding youth comes across as an average youngster. 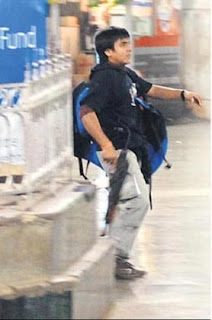 22)Dressed in a black half T-shirt and jeans with a blue rucksack hung over his left shoulder and red sacred thread tied on his right wrist, one might just mistake him to be just another regular college-going student. 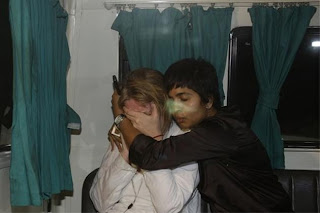 23)One of the terrorists, who identified himself as Imran Babar, called up a TV news channel and said they wanted to have talks with the government for exchange of the hostages. 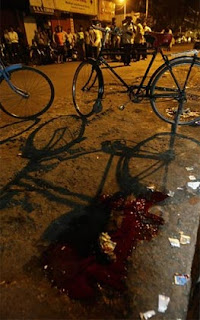 24)"We want to negotiate with the government. Only then will we let go the hostages," Babar, who has apparently worked as a medical representative in an MNC, said. The attacks, he said “were to avenge the "torture and injustice" faced by Muslims in India 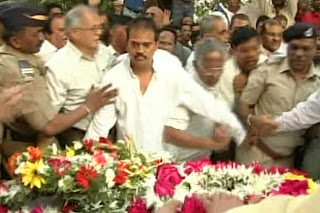 25)Mumbai's additional commissioner of police (east) Ashok Kamte was gunned down outside the Metro; and celebrated encounter specialist Vijay Salaskar was also killed. Kamte was later cremated in Pune.

Posted by PayBlogger at 9:26 PM No comments: