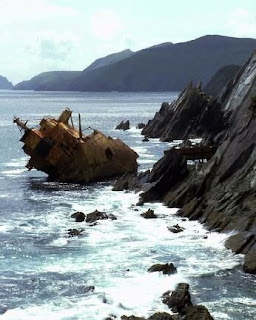 Deep sea treasure hunters have located two potentially valuable wrecks lying off the west coast of Ireland, opening the way for a legal battle over who owns treasure deposited on the seabed in International waters. Shipwreck Company Odyssey Marine has filled claims on two wreck sites found after months of scouring the seabed in and around the English Channel with what it said was advanced new search equipment. The sites lie under between 400 and 600 meters of water about 100 miles to the west of Dingle, Co Kerry. The Florida-based company said the sites, which are 37 miles apart, appeared to contain the remains of steel-hulled vessels.

Posted by PayBlogger at 9:55 AM

Email ThisBlogThis!Share to TwitterShare to FacebookShare to Pinterest
Labels: Technology