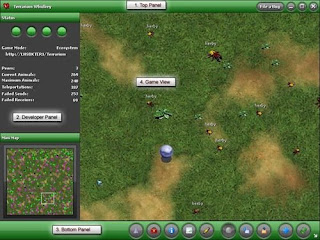 I wonder if any of you have tried "Terrarium" game by Microsoft. You produce an insect that is either carnivorous or herbivorous. Or you can design a plant. You introduce it to the eco system and you watch how it manages itself in competition with other players. I have not had the time to sit down and introduce a fully designed species, but I have made some preliminary designs on a predator. Most of you can probably read an API, so take a look at the object model, and ponder that one for a bit. Particularly I hope we can discuss how a social species can be designed so that its collective behavior is purpose serving regarding hunting, defense, procreation, feeding etc. There are of course some limitations to the species and its interaction with the terrain. To start things off First, one needs to have roles. One needs to have the alternative tactics to hunt for food. There must be some statistics made which evaluate a strategy effectiveness against a particular other species. There must be a flow of communication in the different states. One needs an economic model so that skirmish and hunting packs can be economically viable. The species must be able to conquer an area and then spawn into others. Maybe it should eradicate problematic species and cultivate its food keeping it in check. So that it would not eat until there was no more food? Maybe one should have the hybrid species? The same creature should work scaled down (introduced to a new map) avoiding problematic species and scaled up (masters of the map). The communication model cannot be too time consuming. You will probably find, as I did, that there were some features sadly absent to implement a hive community.

Email ThisBlogThis!Share to TwitterShare to FacebookShare to Pinterest
Labels: Entertainment